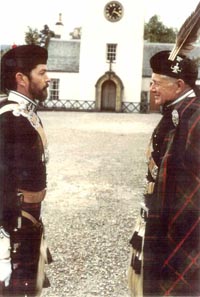 Note that there are additional spelling variations of the above surnames.

The Atholl Highlanders are the only private army remaining in Europe. Under their original name of the 77th Regiment of Foot, they were formed in 1777 by John Murray the 4th Duke of Atholl to relieve other regiments which were serving on North America during the American Revolution. However, they never went any closer to North America than Ireland. The original Atholl Highlanders 77th Regiment of Foot were disbanded in 1783.

The Atholl Highlanders stood guard during visits to Blair Castle for the Crown prince of Japan in 1921 and King Fasal of Iraq in 1933 as well providing guards for frequent royal visitors on their way to Balmoral. After 1933 they had little activity but were reformed by George Ian Murray 10th Duke of Atholl in 1966. John Murray the 11th Duke of Atholl decided to continue the tradition.

Presentation of New Colors to

The Duchess of Atholl presented new Colours to the Atholl Highlanders on Saturday, 27th May, 2006. First some history:

In recognition of Services given to Queen Victoria by the Atholl Highlanders in 1842, and also during her three week residence at Blair Castle in 1844, Her Majesty was pleased to inform Lord Glenlyon, heir of the 5th Duke of Atholl, of her intention to present a pair of Colours to the Athole Highlanders. The Ceremony was duly arranged to take place on September 4th, 1845 and the Chronicles of the Athole family quote as follows: “Wednesday, September 3rd - The battalion paraded to receive Prince George of Cambridge and Prince Edward of Saxe-Weimar, who arrived on that day to take part in the ceremony. The Highlanders encamped that night in the Castle Park.

Thursday, September 4th - About 4:30 p.m. the general parade of the Athole Highlanders was formed in the Castle Park, and about 5 p.m. the royal princes and other guests came on the ground. After the line had been inspected, the corps marched past in quick and double time. Line having been re-formed, Lady Glenlyon advanced to the front, supported on either side by Prince George of Cambridge, carrying the Queen’s Colour, and Prince Edward of Saxe-Weimar, the regimental one.

Her Ladyship then, on behalf of the Queen, presented the Colours, in the following words:-‘Lord Glenlyon and the Athole Highlanders, Her Majesty the Queen has done me the honour to command me to present these colours to you, as a proof of the high estimation in which she held your zeal for her service during her residence in Athole, I am sure you must feel that no higher honour could have been paid you, and I am convinced that the same devoted loyalty which caused the Atholemen to rally round the banner of their sovereign in the last ‘45 will induce you now to preserve these colours with untarnished honour, and hand them down unsullied to posterity.’

The colours were received kneeling by the two senior subalterns, Lieutenants Butter and Keir, and the chaplain (the Rev. Alexander Irvine) offered up an appropriate prayer, after which a royal salute was fired by the artillery, and the battalion again marched past.”

The colours consecreted this past May are the fourth set to be presented to the Atholl Highlanders, the second being those presented by the 7th Duke in 1887, and the third by Mrs. David Butter (now Lady Butter) on behalf of the 10th Duke of Atholl in 1979, in order to preserve the original colours which are laid up in Blair Castle.

The order of the Ceremony on 27th May started with the Atholl Highlanders marching on parade under the Command of the Regimental Sergeant Major, L. Brallsford, who handed over command to the Officer Commanding the Parade, Lt. Col. Sir Blair Stewart-Wilson, KCVO. The officers fell in. The Old Colours were marched on Parade. The Colonel, His Grace the Duke of Atholl, then entered the Parade ground. The Pipes and Drums played a Quick Troop (the tunes were the Battle of the Somme, & The Heights of Darghai), followed by a solo of Going Home as the Old Colours were marched off Parade.

The Duchess of Atholl was received by the Colonel, both inspected the Parade, accompanied by the Commanding Officer and the Parade Commander, Major D. Drummond Moray.

The New Colours were Consecrated, the Service was conducted by Captain the Very Reverend Doctor Robert Barbour, KCVO, MC , and assisted by LI. The Reverend Ian Murray, BD. The Duchess then presented the New Colours. The Duchess made a short address to which the Duke replied. This was followed by the Colours being accorded a General Salute and were marched on Parade, to the tune of Lochtummelside. The Duchess took the salute as the Atholl Highlanders marched past, the Pipes and Drums playing Lady Dorothea Stewart Murray’s Wedding March and The Atholl Highlanders. The Ceremony ended with the enlistment of new recruits and presentations of the awards, before the Atholl Highlanders marched off to the tunes Leaving Port Askaig and 10th Bn HLI Crossing the Rhine.

Other officers participating in the Parade were:- Major A. Stewart of Ardvorlich, DL, Second in Command, in attendance upon the Duchess of Atholl; Adjutant Major A. D. Gordon, QVRM, TD, DL; the Quartermaster Lt. A. Bruce Wootton; and Pipe Major Ian Duncan. Officers for the Old Colours were Lieutenants Viscount Dupplin and The Hon. J. Drummond. Officers for the New Colours were Lieutenants. J. Murray and A. Stewart-Wilson. Capt. J. Drummond Moray commanded the No 1 Half Company and Lieut. J. Bulloch the No. 2 Half Company. The Duke’s Standard Bearer was Sgt. D. Martin and the Commentator Pipe Cpl. I Spence. Approximately 70 other Officers, Highlanders and Pipers and Drummers participated.

Note: Lord Glenlyon started to use the spelling ‘Athole” in the late 1830’s. This was formalized in 1846 when he took the title Duke of Athole. The 7th Duke reverted to ‘Atholl’ in 1893.

The above is compiled from the presentation booklet obtained for Evelyn by Pipe Sgt. (retired) William Clement, who served in the Atholl Highlanders Pipe Band for over fifty years. Prior to that he served in the Black Watch as a piper during the Second World War. He is currently teaching piping at the village school in Thorn hill, Dumfriesshire